For many nature lovers, a good day in the field means successful observations: spotting their favorite organism, or witnessing a rare event. As seasoned enthusiasts and researchers know, those exciting days pale in comparison to the majority of days, where searches are fruitless. This pattern parallels the experience of a Black STEM professional, whose searches for other Black scientists often come up short.

The disparagingly low numbers of Black individuals in natural spaces and research communities largely due to systemic racial poverty. As described by a 2018 study by the National Parks Service, limited socioeconomic resources, a widespread cultural perception that certain ethnic groups have select types of leisure outlets, and racial discrimination are among the leading reasons why Blacks and other people of color infrequently visit national parks. Such examples of racial discrimiation were recently seen in the viral video taken by Black birdwatcher Christian Cooper who, in May 2020, was threatened with the violence of calling the police specifically because he was Black.

Yet, tragic and unjust incidents like these can fortify solidarity in Black and allied communities. Conversations are starting, protestors are marching, and social media is buzzing. People are uniting now more than ever to fight for radical social change; Black people especially are strategizing, organizing, and mobilizing in efforts to collectively enact change and to share our own culture with the world. 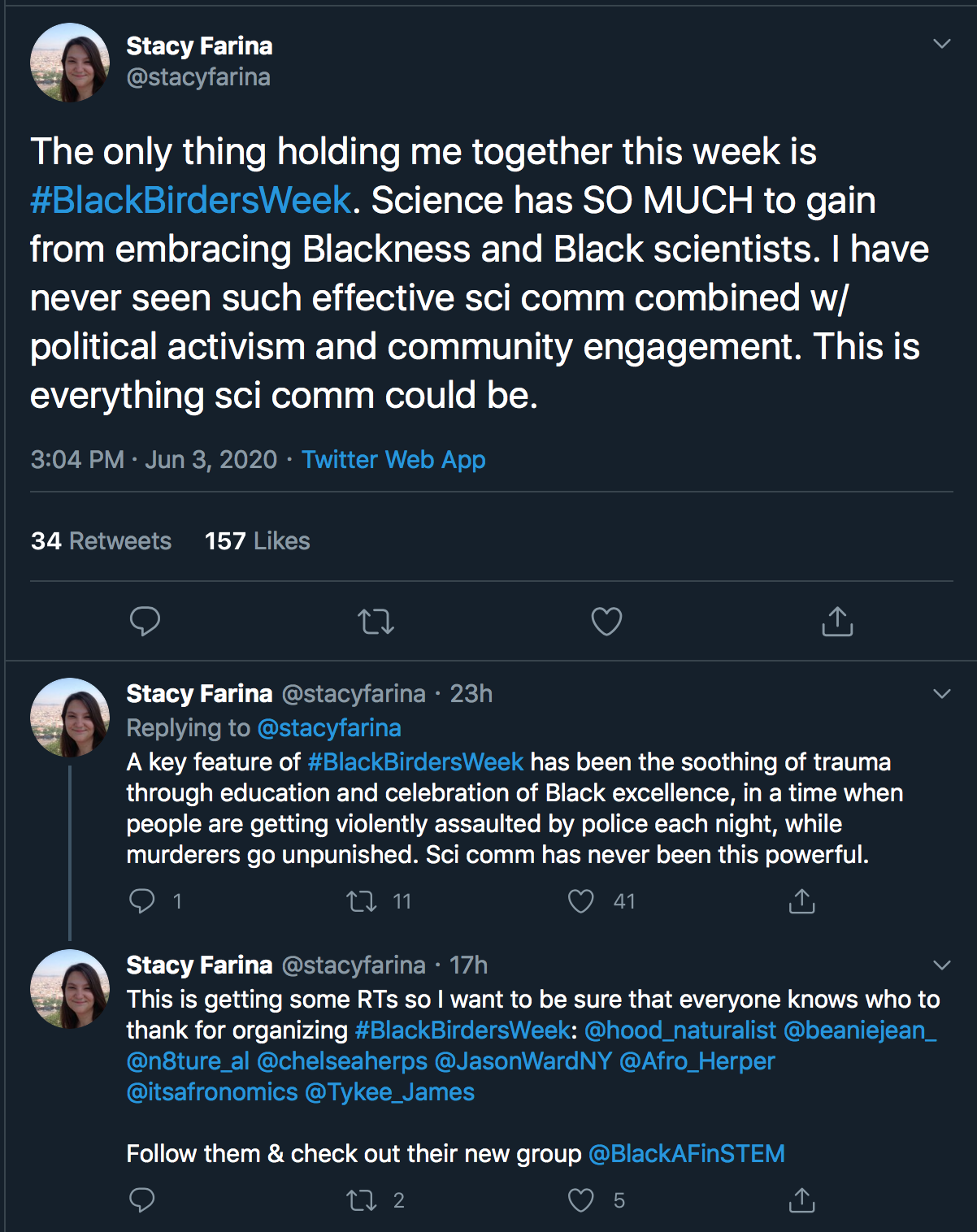 The BlackAFinSTEM collective (@BlackAFinSTEM) and Black Birders’ Week is a powerful example of such an effort. Conceptualized by Anna Gifty Opoku-Agyeman (@itsafronomics) and organized by over 30 members of BlackAFinSTEM, the Black Birders Week movement serves as a strong stance in solidarity with protests against racism and police brutality by highlighting, celebrating, and normalizing Black scientists and nature enthusiasts. As stated by Professor Stacy Farina, an Associate Professor of Biology at Howard University and SICB Member, “a key feature of #BlackBirdersWeek has been the soothing of trauma through education and celebration of black excellence”.

To capture some of the diversity in perspectives and experiences of Black scientists during this time, especially in relation to Black Birder’s Week, we caught up with fellow BlackAFinSTEM members.

Have you experienced racism while in the field?

Racism can be anywhere, and that includes fieldwork and research settings. Black scientists often encounter persistent, yet thankfully less dubious, racial encounters. Black scientists have been mistaken for other Black colleagues, expected to have roles of servitude or assistance, and often have their skills or expertise questioned.

Harmful and traumatic incidents, however, also occur. For Armand Cann, a graduate student at Loyola University, Chicago, it was an unprecedented, aggressive, and public police interrogation that occurred after completing a day of fieldwork. While in the field, Armand’s car had been hit and abandoned, so he went door-to-door, asking neighbors if they’d witnessed how his property was damaged. For reasons unjust, someone called the police. When they arrived, Armand explained his situation and answered questions, but was met with disbelief. The officers questioned him further, “as if [he was] telling a lie,” Armand recounts. Armand complied with unwarranted requests until the officers “felt comfortable” with his answers and his presence. Fortunately, Armand was able to walk away from this situation, but not without emotional scars. Cann’s story serves as a crushing reminder that his appearance can be deemed threatening regardless of the setting.

Encounters like Armand’s, Christian Cooper’s, or even Ahmaud Arbery’s are unpredictable, and can happen at any time. This need for safety affects how we move through our lives: which universities we consider for work and schooling, which conferences we can attend, and field sites that we decide to use, whether it’s for research or pleasure.

The prevalence of racism is undoubtedly a point of contention when we consider whether we can actually be Black, safe, and in STEM, given national discourse. We expect that it generates fears and discourages younger generations of Black youth from exploring, enjoying, and appreciating nature.

What has Black Birders’ Week & its community meant to you?

Black Birders Week affords levity in otherwise arduous times, and also a space for support. It has been “one of the only positive things in my life in the past few weeks,” states Kassandra Ford, University of Louisiana at Lafayette graduate student and SICB member. Academics, environmentalists, SciCommers, and hobbyists alike can share their stories with people who deeply understand their experience. Expanding on that experience publicly, through movements like Black Birders Week, defies the presumption that Black people don’t thrive in natural spaces, or succeed in science fields.

Why is visibility of Black people enjoying STEM and nature important?

When it comes to STEM careers, Black people are the severe minority, making up about 7% of STEM jobs, according to a 2018 Pew study. Thus, in the pursuit of STEM careers, there are very few Black role models to guide the aspirations of young Black scientists. As children and young adults, many of us felt the joy of being outdoors, savored problem solving challenges in our STEM courses, and were endlessly curious about the mysteries of natural life. But we could not escape the feeling that nature and academia did not hold space for us.

With few Black faces in the academic track, it’s easy to convince yourself that there’s a sinister reason why we weren’t present: that you didn’t belong. The number of faces dwindle with the advancement of our career, often making careers in STEM fields synonymous with singularity. Symone Barkley, the National Aquarium’s Manager of Education Programs describes it as the burden of tokenism feels as if we are “always carrying the weight of being perfect at all times. … I do not have the luxury of ‘not knowing’ or dropping the ball.”  Visibility of Black people in STEM mitigates tokenism.

The benefit of Black STEM enthusiasts visibility is extensive. As Rhiannon Kirton, a graduate student at the University of Western Ontario, states, “Having Black folx can also increase the diversity of perspectives and therefore, the impact of programs and decisions made within organizations.”

Assertive representation of Black scientists will not only pivot collective thinking within STEM careers, but as postdoctoral fellow Tiara Moore claims, we can “show the next generation that there is space for them…[that] we can finally breathe and move comfortably in this space now! ” With Black scientists visible, there is three times the likelihood Black students will take an interest in STEM careers.

What is your favorite aspect of doing fieldwork and research while Black?

It is hard work to create safe spaces in nature and in academia for Black people and people of color, but often a joyous effort. Our push to transform unfamiliar areas is primarily driven by our love of nature. For the Black Birders Week team, some of the most savored moments are ones where we can deeply connect with nature: getting down to business in muddy marshes or  enjoying peaceful stillness of the ocean while bird or whale watching.

There is also joy in seeing children react to meeting a Black scientist or naturalist, often for the first time. As Kassandra puts it, “They are so excited to see a Black woman in that role, I hope it inspires them to become scientists themselves.” And when we see other Black nature and science lovers, it stokes calmness, joy, and feelings of safety. Having a network of fellow Black nature and STEM enthusiasts bolsters confidence to contribute ideas and perspectives our nonBlack peers may not have considered. Starting these conversations in turn promotes political discourse that may not have otherwise happened. Simply put, our presence begets change.

These stories represent just a glimpse of the experiences of Black STEM professionals. The   BlackAFinSTEM collective comprises a diversity of Black communicators, educators, researchers, field scientists, professionals, and parents who are deeply passionate about continuing these conversations around our experiences in science, economics, and policy. Black Birders’ Week is just the beginning. Mississippi State undergraduate student  Kanshisha Taylor said it best: “[we] will not sit by and let injustices keep going and [we will not] be quiet about our experiences as Black people in STEM.” Our hope is that this movement will fortify alliship with the diversity of scientists and nature enthusiasts of all walks and colors.

Check out @BlackAFinSTEM, #BlackBirdersWeek, #BlackAFinSTEM, and #BlackInNature for more stories from fellow collective members and the broader community of Black STEM professionals.

Dr. Shaz Zamore (@TheDoctaZ) is a neuroengineer by training and STEAM Outreach Coordinator and Instructor by trade. Working for the ATLAS Institute at CU Boulder, Dr. Z merges social justice into STEM Education in and out of the classroom by developing a neuroscience comic series for under-served students. They also sit as the Chair of the Public Affairs Committee for SICB. On their days off, Shaz is found in the mountains, searching for reptiles in the summer or backcountry snowboarding in the winter.